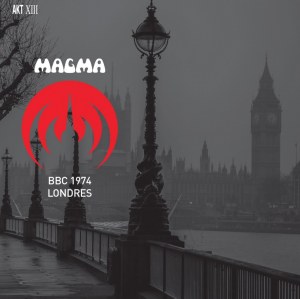 This high quality recording carried out on March 14th, 1974 in the London BBC studios, is here carefully remastered for a vinyl release. This double LP include two Magmaian masterpieces in unique versions, performed by the group that was at the origin of their creation. If the completed versions played by the MAGMA of 75-76 are most familiar to us, those offered us here present a major interest on several levels: their structure first of all, which at that time was not yet finalised, and comprised sequences which were subsequently either re-arranged, thereafter in a different way, or deleted: THEUSZ HAMTAAHK whose pseudo-slowness of tempo is matched only by the contained violence that inhabits it, and KÖHNTARKÖSZ where the magic of the keyboards brings to this work an alternative just as bewitching as the one engendered at the Taverne de l'Olympia the following year, by the divine soaring of Didier LOCKWOOD’s violin.