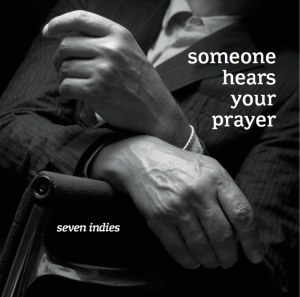 Seven independent souls - a septet of mercenaries without a map or compass, let loose in the studios of Music Unit. James Mac Gaw, guitarist for Magma, has at last succeeded in gathering his Electric Orchestra, summoned to create a new chapter and to find a voice. An in vivo creation. James - singer! – spurs on the horde in love with rock and Coltrane. Intensity and depth of sound, sophisticated darkness, de profundis lyrics (Make the previous life die) : Someone hears your Prayer hails both the living and the dead. A paroxystic, gloomy and bright breakaway. Dam solar!

Dom Poupardin has immerged himself into the real-time creation of the Seven Indies' album, knowing perfectly how to make us forget his camera to plunge us right into the core of their sonic smithy. Daily glories and wanderings of their compositions, harmonies and dissonances of their faces under stress. Underwater story - Split-screen and black-red light: an apnoeic raid of which the album will in fine sound the knell of relief.

Listen to some excerpts here: http://www.musicunit.fr/artiste-fr/seven-indies

NB: All incomes will go to James Mac Gaw whose fight against the disease continues.