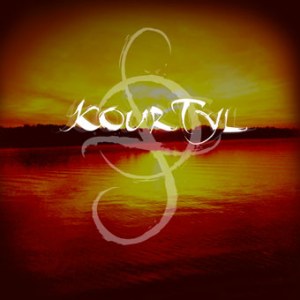 Good day to you. Just for once, this is Isabelle Feuillebois writing to you. I have fallen in love with a group, and I want to tell you about it: Kourtyl Four determined and totally talented young muscians who have just recorded their first album in our studios. I have to tell you, I’m one heck of a fan! I love their big sound, their lyrics, their imaginary and poetic world, their anger and their sweetness, and most of….Paulo’s voice! This really reaches me. These guys do not all come from Kobaia. Their world isn’t that of Kobaia, even though, at soul level, they may as well be Kobaians. This is different – this comes from heavy metal planets where rage against the machine rules! It’s always difficult to describe music, especially if writing about it is not your business. But I’m going to try and get you to want to listen to this album, to get into Marcus, Paulo, Jeremie and Briac for yourself. Their music isn’t pure hard heavy metal, where melody is, all too often, just not there – and I know that comment isn’t going to make me any friends! On the contrary, melody is the first thing here, dominant, presented in sophisticated arrangements. In my mind, that makes it something new. You can also entertain yourself trying to figure out which MAGMA musicians have guested. To put it bluntly, there aren’t any groups like this France. But now, at last, there is one: KOURTYL!!! Deliberately heavy, powerful and modern - but also melodic and out of this world.
Available only by mail order or: